Through the various rodeo organizations, there is a wide variety of events in which the contestants participate. The information provided in this section is largely provided by the PRCA and depicts the events of ProRodeo. Professional rodeo action consists of two types of competitions – roughstock events and timed events – and an All-Around Champion crown.

In timed events (Steer Wrestling, Team Roping, Tie-Down Roping, and Barrel Racing), cowboys and cowgirls compete against the clock, as well as against each other. A contestant’s goal is to post the fastest time in his or her event. In Steer Wrestling and the roping events, calves and steers are allowed a head start. The competitor, on horseback, starts in a three sided fenced area called a box. The fourth side opens into the arena. A rope barrier is stretched across this opening and is tied to the calf or steer with a breakaway loop. Once the calf or steer reaches the head-start point, the barrier is automatically released. If a cowboy breaks that barrier, a 10-second penalty is added. 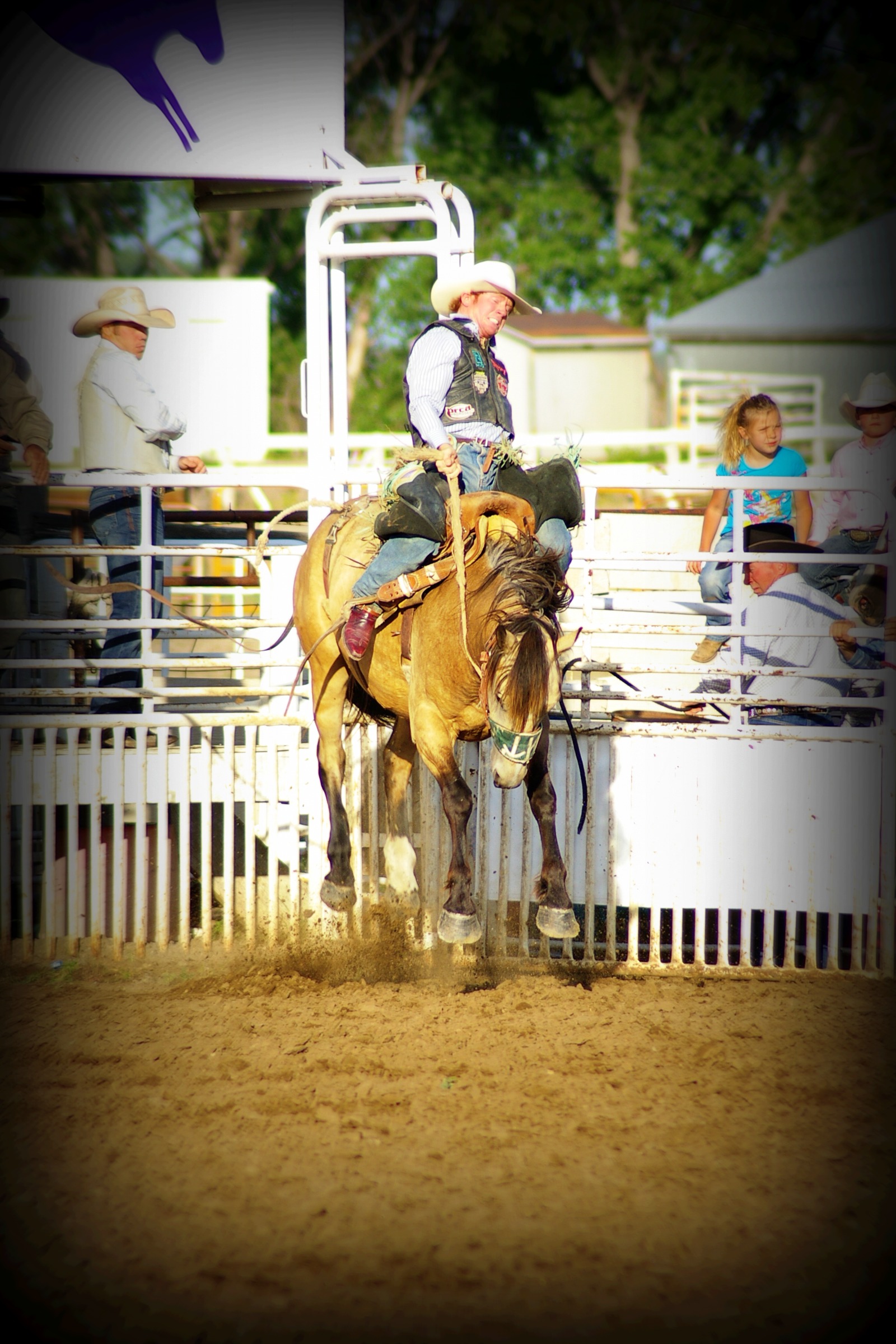 Saddle Bronc Riding evolved from the task of breaking and training horses to work the cattle ranches of the Old West. Many cowboys claim riding saddle broncs is the toughest rodeo event to master because of the technical skills necessary for success.

Judges score the horse’s bucking action, the cowboy’s control of the horse and the cowboy’s spurring action. While striving to keep his toes turned outward, the rider spurs from the points of the horse’s shoulders to the back of the saddle. To score well, the rider must maintain that action throughout the eith-second ride. While the bucking ability of the horse is quite naturally build into the scoring system, a smooth, rhythmic ride is sure to score better than a wild, uncontrolled effort.

Rodeo competition, in the beginning, was a natural extension of the daily challenges cowboys confronted on the ranch – roping calves and breaking broncs into saddle horses.

Bull Riding, which is intentionally climbing on the back of a 2,000 pound bull, emerged from the fearless and possibly fool-hardy nature of the cowboy. The risks are obvious. Serious injury is always a possibility for those fearless enough to sit astride an animal that literally weighs a ton and is usually equipped with dangerous horns.

Regardless, cowboys do it, fans love it and bull riding ranks as one of rodeo’s most popular events.

Size, agility and power create a danger that makes bull riding a crowd favorite everywhere. Balance, flexibility, coordination, quick reflexes and, perhaps above all, a strong mental attitude are the stuff of which good bull riders are made.

To stay aboard the bull, a rider grasps a flat braided rope, which is wrapped around the bull’s chest just behind the front legs and over its withers. One end of the bull rope, called the tail, is threaded through a lop on the other end and tightened around the bull. The rider than wraps the tail around his hand, sometimes weaving it through his fingers to further secure his grip.

Then he nods his head, the chute gate swings open, and he and the bull explode into the arena.

Every bull is unique in its bucking habits. A bull may dart to the left, then to the right, then rear back. Some spin or continuously circle in one spot in the arena. Others add jumps or kicks to their spins, while others might jump and kick in a straight line or move side to side while bucking.

Speed and strength are the name of the game in Steer Wrestling. In fact, with a world record sitting at 2.4 seconds, steer wrestling is the quickest event in rodeo.  The objective of the steer wrestler, who is also known as a “bulldogger,” is to use strength and technique to wrestle a steer to the ground as quickly as possible.

Here’s the catch, the steer generally weighs more than twice as much as the cowboy and at the time the two come together, they’re both often traveling at around 30 miles per hour. Speed and precision, the two most important ingredients in Steer Wrestling, make this one of the most challenging events.

When the cowboy reaches the steer, he slides down and off the right side of his galloping horse, hooks his right arm around the steer’s right horn, grasps the left horn with his left hand and, using strength and leverage, slows the animal and wrestles it to the ground. His work isn’t complete until the steer is on his side with all four feet pointing the same direction. However, that’s still not all there is to it.

To catch the sprinting steer, the cowboy uses a “hazer,” who is another mounted cowboy who gallops his horse along the right side of the steer and keeps it from veering away from the bulldogger.

The efforts of the hazer can be nearly as important as those of the steer wrestler. For that reason, and the fact that he sometimes supplies the bulldogger with a horse, the hazer often receives a fourth of the payoff.

Team Roping, the only true team event in ProRodeo, requires close cooperation and timing between two highly skilled ropers – a header and a heeler – and their horses. The event originated on ranches when cowboys needed to treat or brand large steers and the task proved too difficult for one man.

The key to success? Hard work and endless practice. Team roping partners must perfect their timing, both as a team and with their respective horses.

Similar to tie-down ropers and steer wrestlers, team ropers start from the boxes on each side of the chute from which the steer enters the arena. The steer gets a head start determined by the length of the arena.

Team ropers spend long hours perfecting their timing with each other and their horses. One end of a breakaway barrier is attached to the steer and then stretched across the open end of the header’s box. When the steer reaches his advantage point, the barrier is released, and the header takes off in pursuit, with the heeler trailing slightly further behind. The ropers are assessed a 10-second penalty of the header breaks the barrier before the steer completes its head start.

The header ropes first and must make one of three legal catches on the steer; around both horns, around one horn and the head, or around the neck. After the header makes his catch, he turns the steer to the left and exposes the steer’s hind legs to the heeler. The heeler then attempts to rope both hind legs. If he catches only one foot, the team is assessed a 5-second penalty. After the cowboys catch the steer, the clock is stopped when there is no slack in their ropes and their horses face one another.

Another important aspect to the event is the type of horses used by the ropers. The American quarter horse is the most popular among the timed-event competitors, particularly team ropers. Heading horses generally are taller and heavier because they need the power to turn the steer after it is roped.   Heeling horses are quick and agile, enabling them to better follow the steer and react to its moves.

As with Saddle Bronc Riding and Team Roping, the roots of Tie-Down Roping can be traced back to the working ranches of the Old West. When calves were sick or injured, cowboys had to rope and immobilize them quickly for veterinary treatment. Ranch hands prided themselves on the speed with which they could rope and tie calves, and they soon turned their work into informal contests.

As the event matured, being a good horseman and fast sprinter became as important to the competitive tie-down roper as being quick and accurate with a rope.

Today, the mounted cowboy starts from a box, a three-sided fenced area adjacent to the chute holding the calf. The fourth side of the box opens into the arena.

The horse is trained to come to a stop as soon as the cowboy throws his loop and catches the calf. The cowboy then dismounts, sprints to the calf, and throws it to the ground by hand, a maneuver called “flanking.” If the calf is not standing when the cowboy reaches it, he must allow the calf to get back on its feet before flanking it. After the calf is flanked, the roper ties any three legs together with a pigging string – a short, looped rope he clenches in his teeth during the run.

While the contestant is accomplishing all of that, his horse must pull back hard enough to eliminate any slack in the rope, but not so hard as to drag the calf.

When the roper finishes tying the calf, he throws his hands in the air as a signal that the run is complete. The roper than remounts his horse, rides forward to create slack in the rope and waits 6-seconds to see if the calf remains tied. If the calf kicks free, the roper receives no time.

Barrel Racing is an event in which a horse and rider attempt to complete a clover-leaf pattern around preset barrels in the fastest time. Though both boys and girls compete at the youth level and men compete in some amateur venues, in collegiate and professional ranks, it is primarily an event for women. It combines the horse’s athletic ability and the horsemanship skills of a rider in order to safely and successfully maneuver a horse through a clover leaf pattern around three barrels (typically three fifty-five gallon metal or plastic drums) placed in a triangle in the center of the arena.

In timed rodeo events, the purpose is to make a run as fast as possible, while the time is being clocked either by an electronic eye, (a device using a laser system to record times), or by an arena attendant or judge who manually takes the time using a keen eye and a flag to let a clocker know when to hit the timer stop; through this last method is more commonly seen in local and non-professional events.

Barrel racers in competition at the professional level must pay attention to detail while maneuvering at high speed. Precise control is required to win. Running past a barrel and off the pattern will result in a “no time” score and disqualification. If a barrel racer or her horse hits a barrel and knocks it over, there is a time penalty of 5-seconds per barrel, which usually will result in a time too slow to win.